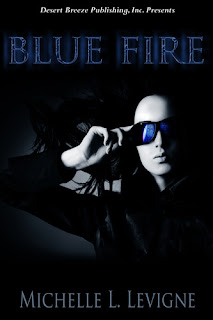 Today we're going off-subject and out of this universe.

Even though we're officially talking about my October Tabor Heights release, "White Roses" this week, I want to point out that I have two SF pieces coming from DBP in November.

"Blue Fire" is a full-length SF romance, and ties into DBP's Borealis universe through the short story, "That Synching Feeling," which we'll talk about tomorrow. (See how sneaky I am, making sure you have to come back tomorrow?)

Rhianni Day, our heroine, is a military brat -- raised by her father's Rover Corps squadron, and serving as a medic until her father's death and a new assignment sends her home to the colony world, Mallachrom. Her father always planned to come home to Mallachrom and find out what happened when his squadron was pulled out and sent to the far side of the galaxy to fight the Talroqi -- because although Mallachrom was far from the fighting, the Talroqi landed and held the planet for a while, slaughtering most of the colony. The Talroqi are hive creatures and use humans for food and other nefarious purposes Rhianni discovers almost too late. (I just love it when I can use the word "nefarious.")

The big challenge for Rhianni is that her best friend in childhood, Petroc Ash, is the leader of a group of survivors from that invasion. They're called the Taken: children snatched from their homes on the verge of the invasion, and sheltered in the wilderness of Mallachrom by the Shadows -- sentient canines. Now, going on 20 years later, the new colonists and other survivors live in fear of them. They aren't quite Human anymore, they don't trust the government, and the government is doing all it can to control them and blame them for everything that goes wrong.

Rhianni's job: find out what really happened during the invasion, what really happened to the Taken, and prove the Taken aren't pawns of the Talroqi, waiting to destroy the colony. For his part, Petroc has far too many secrets to guard and lives to protect. He's ready to tear himself apart with longing for a soul-bonding with Rhianni. The Taken mate for life, but that could kill Rhianni, because Taken can't leave Mallachrom, and she plans to leave when her mission is finished, never to return.

Check out the Cyber Launch Party on November 15 for "Blue Fire" and "That Synching Feeling."
www.cyberlaunchparty.blogspot.com
Posted by Desert Breeze Publishing at 06:00