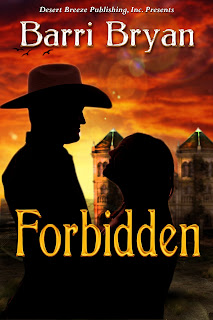 Thank you for supporting Barri's week in the spotlight. Leave a comment today, Saturday and Sunday along with your email (so we can get ahold of you) and we'll pick a winner on Monday, 14 JAN to receive a copy of Barri's novel, "Forbidden." Enjoy the excerpt!

Maggie grinned. "I would like to get off this horse for a while."

They rode to the creek, dismounted, tethered the horses, and sat under the big oak.
Maggie rested her back against the massive trunk. "Did you enjoy the dance last night?"

Zoë pulled a dry blade of grass and twisted it between her fingers. "You didn't ride all the way out here on the back of a swaying horse to talk about a dance."

"No, I didn't. Shall I come directly to the point?"

"Why did you marry Holt?"

Zoë dropped her head. "He's rich and in ill health. Maybe I saw a way to become a rich widow in a short time."

"Then why did you sign a prenuptial agreement cutting you off from inheriting anything Holt has after he was gone?"

"How did you know that?" Maybe she shouldn't have been so quick to invite Maggie to speak her mind.

"There aren't many secrets at Triple H, Zoë, but in this case, Clint told me. He also said he paid you a great deal of money to get you to sign that agreement."

Shame brought the heat of a blush to Zoë's cheeks. "I did take money from Clint, but not for the reason you think."

"I don't want you to explain, and don't ask me how Holt keeps me virtually a prisoner at Triple H, because I can't tell you. I know how Holt Hamilton operates. I should -- I'm one of his victims." After a pause for breath, Maggie demanded, "Did Holt force you to marry him?"

Zoë's fingers dug around in the dry grass. "Yes."

"He's blackmailing you, too, isn't he?" Zoë's own pain was quickened by sympathy for Maggie. "Clint doesn't suspect?"

"I'm careful to see to that. Officially, I'm Holt's private secretary. The truth is Holt keeps Clint at Triple H by forcing me to stay. I have every reason to believe Holt keeps the damning evidence he has against me in a safe deposit box in a bank in Mason City. I can live with that." Maggie stared toward the far horizon. "But what happens when Holt dies and his safe deposit box key becomes the property of his sole heir?"

Zoë recalled Holt once telling her he had the proof of her identity safely tucked away in a bank vault in Mason City. "When Holt dies, Clint will have access to that box?"

Maggie's tone was grim. "Not immediately, but eventually, and what he will find there could destroy the lives of two people and hurt Clint immeasurably."

Zoë reached to touch Maggie's arm. "I wish I could do something to help."

Maggie's reply sent shock waves shivering through her. "You can."


"Holt would never let me into that box."

Maggie leaned forward. "He wouldn't have to know. I have a plan. It's risky, daring and complicated. If it works, you stand a chance of getting into that box before Holt dies."

The naïve Zoë Martin who had come to Triple H two months ago would have been terrified at the thought of planning and executing a scheme that was both complicated and dangerous. She would never have considered conspiring against a man as powerful and devious as Holt Hamilton. A much wiser, disillusioned Zoë Hamilton who sat now, grave and melancholy, was willing to dare the impossible to keep safe dark secrets that could send her to prison. "Tell me your plan."

"We will have to involve two other people and neither of them rates high in the trust department. You will be the one taking the risks." Maggie paused and caught her bottom lip between her teeth.

So the plan required she break the law. Zoë would worry about that later, when she wasn't staring into the grim face of disaster. "Tell me what I have to do.