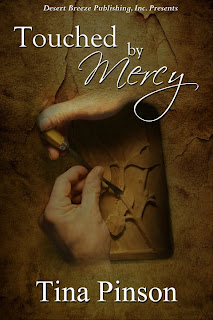 Preston led his boys in evening study and prayer then tucked them in. They weren't babies anymore, but he enjoyed the few moments before bed with them. He enjoyed mussing their hair, hugging them, and telling them he loved them. As fast as the years moved, it wouldn't be long before they'd be grown, tucking in children of their own. He recalled the way their mama used to kiss their cheeks and whisper her love as she pushed the blankets around them. He remembered with an ache.


Would he ever stop missing her? Would the boys ever have another mother? Would he ever take another wife?
He lay back on his pillow and asked the Lord those very things. He believed he'd have them someday. Maybe soon. The ache he once bore had eased with time, and the conviction that he'd never love another was being tested. It'd been tested that very afternoon when he found himself looking into Miss Northam's deep green eyes with longing. It surprised him. Her, too, judging from her reaction.

He remembered something the Lord had told him three years before, about a year after his wife had died. He lay in bed, asking the same questions. Figuring the Lord agreed, he'd told the Lord a firm no to every one of them. No new wife, no marriage, no... He loved his dear Sarah too much. How could the Lord want him to marry, or love another?

The Lord surprised him.

Preston, my beloved son, the ache will ebb, and a time will arise when you'll take another wife.

Preston had chuckled. "This can't be. I've loved Sarah for too long. I couldn't love another. I couldn't bear it." Besides there weren't many woman in the territory at the time.

You will. The voice in his heart had been adamant.

"I don't know any women. Not any that I want to marry."

I've chosen one for you, beloved.

Preston nearly gasped. But he didn't scoff at God. "All right, let's say you have. How will I know her? Does she have a name? Who is she, Lord? Where is she?"

When the time comes, you'll find her at the Chicken Ranch.

Preston had sat up with yelp and argued no man of God could find a woman to be his wife at the Chicken Ranch. A woman from a brothel? A woman like Lil? What did the Lord want him to be… another Hosea? Surely not.

The Lord had been adamant. I know whom I have for you. She'll be at the Chicken Ranch.

Petrified he'd find her sitting in her long underwear on the front porch, Preston took long detours home, skirting the ranch so he wouldn't find the wife the Lord had for him.

Barnes & Noble
Touched By Mercy—available soon
In the Manor of the Ghost http://tiny.cc/oh767

Christian Books Distributors
Touched By Mercy – available soon
In the Manor of the Ghost http://tiny.cc/4u5h9
In honor of the release of Touched By Mercy I am running a contest, Win a Nook… Touch Mercy for the month of Dec. 2010. Check out my blog under the Touched BY Mercy Contest page for the particulars.
http://tinapinson.blogspot.com/
Posted by Desert Breeze Publishing at 07:03