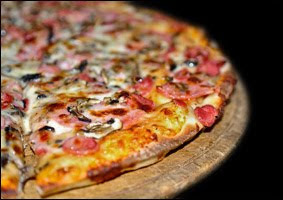 In Storm Surge, several days into hurricane season, heroine Briana brings a big batch of homemake chocolate chip cookies to work. Hero Justin ambles out of his office after her offer a snack.

"Have I ever told you," he said, "that chocolate chip cookies are a weakness of mine? My mama controlled me with them when I was a kid."
They laughed together and looked into each other's eyes for a moment, the way it had happened several times before.

The exchange prompts Briana to think, Always over food. Wonder why?

Food -- whether home-cooked or restaurant fare -- plays a ubiquitous role in the lives of the characters in Storm Surge as it does in real life on the upper Gulf Coast and most other areas. It's more than mere sustenance. People play, work, make deals, break up and fall in love over dining tables laden with food, around all-you-can-eat buffets, at drive-throughs and take outs. Food and drink are the lubricant that smooths humanity's social interactions.

On her very first day at work, Justin takes Briana to lunch to "go over a few things" before he leaves town on a business trip.

They went to Nick's Oyster House and took a table on the deck overlooking the Cutter Cove Marina. Canopied by a cloudless blue sky, warmed by a barely-there breeze, they chatted amiably and dined on fried oyster po'boy sandwiches, bowls of tasty gumbo and large glasses of sweet tea.

Although the location of the fictional Nick's Oyster House, a Cajun seafood place, is similar to that of The Fish House ( http://bit.ly/dMaWWn ), which overlooks Pitts Slip Marina on the shore of Pensacola Bay, the menu more closely resembles that of Jerry's Cajun.Cafe and Catering ( http://bit.ly/eSwzjb ).

Nick's has a recurring role in the story. So does pizza from Double Jacks, which Justin describes as, "Locally owned pizza place, secret recipe, better than any chain pizza I've ever had." I had no real-life counterpart to Double Jack's in mind when I wrote Storm Surge, although there are any number of pizza places in Pensacola that would suffice, including Hopjacks and Ozone Pizza Pub.

But there's plenty of homemade food, too. Adjuster Susan Stinson brings a big dish of homemade lasagne to work for the crew. On the Kemp's sailboat, Kelsey Kemp serves big platters of "...crisp, raw veggies and dip, meat and cheese cubes, ham and sour cream rolls held in shape by toothpicks." And when Justin follows Briana to her parents' house to smooth over a rough spot in their relationship, her mother, Linda, offers Justin lunch:

"Why don't you let me make you a sandwich? Ham and cheese, chips, sweet tea." .... Linda busied herself for a few minutes, and what she put on the table to go with the sandwiches on their plates was more than just a snack -- macaroni salad, cold baked beans, tomato slices. Southern comfort food, the kind Justin had grown up with and still loved.

There are any number of other references to food in Storm Surge. Hmmm, I wonder if I was hungry the whole time I was writing this novel!


*********
Image Credit: Copyright by Ilco and StockXchange.com
Posted by Desert Breeze Publishing at 05:46