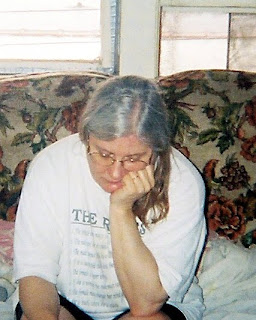 STEPH: I don't know much about Saving Pale Moon. What's it about?

THERESA: Saving Pale Moon is the first story in The Sisters Callaway series. Jessie was adopted by the Callaways as a child. She's been happy until recently. Lately, because of medical and personal problems, she's decided to meet her birth mother. She goes to Texas to find answers; she never expected to find love.

STEPH: Where did you get the inspiration for the story?

THERESA: I've been living with the Callaways for two decades, off and on. I first thought them up in the late 1980s, but I didn't do any thing beyond writing the first book. (I never sold it.) Jessie's story came together in 2006. I wrote it while living in Georgia. It was originally set in that state. When my husband and I spend the winter in Texas, I changed the setting and added the horse. Pale Moon just arrived one day and the story came together.

STEPH: How long did it take you to write? 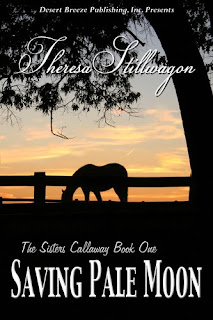 THERESA: The first draft took about four months. I've been working on it since 2006. The last rewrite happened while doing my edits. I've never had such intense edits before. It is a much better book.

STEPH: What did you think when you saw the cover?

THERESA: I thought, "Wow, its perfect." I was hoping to have a horse on the cover, but the dawn time is also important. Jessie is starting a new life.

STEPH: Cast the movie. Who are the leads?

THERESA: I really don't have any ideal who I would cast.

STEPH: Do you have an ebook reader?

THERESA: No, but hope springs eternal. My birthday is next month, and my husband knows I want an ebook reader.

STEPH: Tell us about the place you live?

THERESA: Savannah, Georgia. I love the history surrounding the place. Right now, I'm living in a RV, in a campground, with my husband, Mike, and two cats, Fred and Barney.

STEPH: How did you come up with the title?

THERESA: I'm not really sure. This was the fourth or fifth one, and it just stuck. I didn't like it at first, but it grows on you. Pale Moon is important to the story, so I had to put him in the title.

STEPH: Tell us about your writing space.

STEPH: What country would you like to visit that you haven't been to yet?

THERESA: I've never been to any country. I'd like to visit Ireland or Scotland. I love the history and culture of those countries.
Posted by Desert Breeze Publishing at 06:00